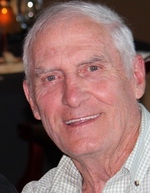 The Calgary Senior Men’s Slopitch League would like to express it’s heavy heart and condolences to the family of Al Fitzsimmons who passed away September 4th, and especially to our friend and team-mate Mike Fitzsimmons, Al’s son.

It was a special and unique thing to have a father and son combination in our league, and both such joys to know and play slo-pitch with and against.

Al’s obituary follows, and can also be seen here:

As a reminder, we memorialize all CSMS League players who pass away under the ‘League History’ section of the website. Each year lists those we have lost and has a permanent link to their obituary.

The CSMS League would like the Fitzsimmons to know we are joining you in grieving the loss of Al.

William Allen (Al) Fitzsimmons passed away with a grateful heart and in peace on September 4, 2021, at the age of 88 years.

Al was born in Calgary and preceded in death by his parents James and Roselean Fitzsimmons and older siblings George, May, Margaret, Agnes, Elizabeth, and James. Al grew up in Bankview and attended Sacred Heart School and later St. Mary’s High School where he played hockey and football.

He married his love Dolores Deck in 1955 and together they celebrated over 65 incredible years forging many memories. They raised seven children: Michael (Teresa), Robert (Marie), Terry (Julie), Patricia (Simon), John (Carol), Thomas (Doneen), and Brian (Michael). Al’s grandchildren and great-grandchildren will dearly miss their gregarious, generous, and goodhearted GGpa, who has left them with a blueprint for a good life. He lived a life which exemplified total honesty, unwavering loyalty, and unconditional love.

_Apart from his family and friends, Al loved horses. He worked on the track grooming horses before taking on a career in the trades where he became a master plumber and gasfitter. Al retired from Fitzsimmons Plumbing after 30 years to enjoy time with Dolores, his family as well as his church and baseball community. _

While focused on family and faith, Al always gave his time and energy to make his community better. His hands and heart impacted many including the Scouts, Guides, Calgary Big League Baseball, Calgary Exhibition and Stampede, Springbank Park for All Seasons, St. Michael Catholic Community, Inn from the Cold, Calgary Drop-in Centre and so many more.

Al was also extremely talented with his hands as evidenced in his building of homes, garages, and furniture as well as carving (totem poles!) and making woodcraft and games.

In his final years, Al loved to be on the ball diamond. Whether at his home field in Charleswood or on the road in St. George, Utah, and spring training in Palm Springs, California, Big Al was still crushing and bare handing the ball even in his 80’s. It was off the field, however, where he found his greatest joy in his many treasured friendships.

Al’s family would like to thank the staff, volunteers, and medical team at Rosedale Hospice for their extraordinary care, comfort, and tenderness to him in his last days.

A Roman Catholic Mass of Resurrection will be celebrated on Friday, September 24, 2021, at 11:00 AM at St. Michael Catholic Community, 800 85 Street SW, Calgary, AB. With respect to current Covid-19 precautions and city bylaw, we anticipate the requirement to wear face coverings and no funeral reception.

In lieu of flowers, please consider a donation to a charity of your choice in Al’s memory. Many of his special charities focused on the homeless including the Calgary Drop-in Centre