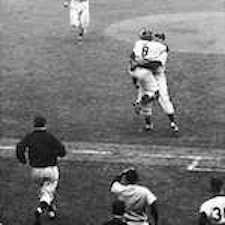 For those Paying attention, you probably know, I am a Pretty Big Fan of Mr. Berra.
So I wanted to share a few Things about Yogi. And I know everyone had this day marked on their Calendar and have been waiting Patiently for this message. So without further adieu……….

- Yogi received his nickname from his friend Jack Maguire, who, after seeing a newsreel about India, said that he resembled a yogi from India whenever he sat around with arms and legs crossed waiting to bat or while looking sad after a losing game.

- Yogi won 10 World Series rings as a player with the Yankees and played in 75 World Series games, both of which are all-time records

-Berra posted an .811 OPS in the Fall Classic with 12 homers and 39 RBIs, all while playing behind the plate

-He slugged the first pinch-hit home run in World Series history, in 1947 off the Dodgers’ Ralph Branca

There are too Many Interesting Facts about Yogi to list here. But thank you everyone for Celebrating Yogi Berra’s Birthday with Me.
And for those who don’t know, I am not a Yankees fan except when it comes to Yogi Berra !!
How Can You Not Love Him

Cheers Everyone,
Paul M
The picture I included in this message is of Yogi Hugging Don Larson after throwing a perfect game in 1956
And one more little known fact that will be sure to amaze you,
On July 18, 1999, Don Larson threw out the opening to Pitch to Yogi Berra as part of Yogi Berra Days. That Day, David Cone threw his only perfect game, and it was the First Perfect Game by a Yankee Pitcher since, You guessed it, Don Larson’s in 1956 which was of course caught by Yogi Berra,
You Can’t make this Stuff up!!

Paul,
As a big fan myself of Yogi over the years, I always appreciate your comments about him and his career. Especially " Nobody goes there anymore. It’s too crowded." I’m sure you’ve checked out MLB.com stuff on his birthday. See Yogi as movie critic. Tremendous career, one of a kind! Thanks.
Tom

Thanks for posting all the great info on Yogi Berra. I’ve always been a casual fan and didn’t really appreciate how great a career he had.