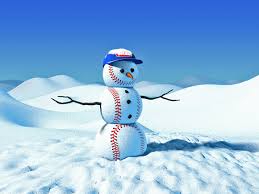 Ok, who was it that got their ball glove out of winter storage in March? I’ve TOLD you before – WAIT UNTIL APRIL. I understand. The weather got a little bit warm and you just HAD to get your glove out. Well, now the weather gods are punishing us for YOUR impatience with snow, cold and howling winds. Put that old hunk of leather back in its box until April 1st!

I wish I really HAD something to update you with! Mostly this is just a letter to let you know that the league is still intact, the Board members are still conscious (mostly) and sober (a few), and that we absolutely plan to be playing ball…sometime. However, we are at the mercy of the City of Calgary and Alberta Health Services to open up the diamonds and allow us to use our diamond permits. What little we hear is that the City may announce a decision on April 15th, but that it will be contingent on Alberta Health Services going to the next stage and opening up outdoor adult sports.

And don’t hold your breath on that! As I’m sure you know, the COVID numbers had been dropping and there was some reason to be optimistic that we could start the season on time. But the last few weeks, the numbers have started trending up again and there just aren’t enough vaccines getting into arms yet to reverse that upward trend. So, since my crystal ball is still in the shop for repairs I can’t be sure, but it would seem unlikely we’ll be able to start the season on May 4th as planned.

As you’ll recall, last year we were finally allowed to play ball in early July using a cohort-based approach. What with vaccines now available, we’ve been hoping for a full regular season this year. It just ‘feels’ as if things have improved, right? But the reported daily numbers of infections now are actually higher than last spring. Your guess is as good as anyone else’s, but at this point the most likely scenario is perhaps a repeat of last year’s cohort-based play, starting sometime in June.

But don’t despair! Your Board of Directors is sitting ready to jump-start the League into operation as soon as we get the word from the City. We believe we can basically get the evaluations, draft and scheduling done for both regular evening ball and this year’s NEW day ball done inside of two weeks. So when things open up, expect to find yourself out on the diamond FAST!

We’re extending the registration deadline indefinitely because of all this, so get yourself signed up. We have LOTS of interest in dayball and will have at least four teams made up of AA and AAA players for that. As for evening ball, if you played last year we’re rolling over your fees and assuming you’re playing again in 2021. Please let John Schmidt know if otherwise.

The next Board of Directors meeting is scheduled for April 17th. I will update everyone again after that meeting. Fingers crossed for better numbers (and weather!) by then.

To paraphrase the immortal Red Green: ‘Keep your glove on the ground. We’re all in this together.’